Model Railroader magazine does the math when its 1,000th issue arrives this month! 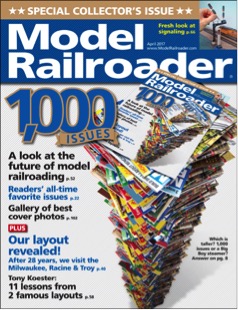 Eighty-three plus 4 really does equal 1,000. It took 83 years and 4 months for Model Railroader magazine, the world’s best-selling monthly magazine about the hobby of model railroading, to reach a milestone of 1,000 published issues.

The April 2017 issue will celebrate Kalmbach Publishing Co.’s longest-running hobby magazine with commemorative features plus the fresh stories, tips and train layout designs that have made Model Railroader one of the most enduring enthusiast brands ever.

First appearing in January 1934, Model Railroader magazine began as a sideline business for Al Kalmbach, a Milwaukee commercial printer with a passion for trains and model railroads. Amid the Great Depression, Kalmbach’s side project grew to a circulation of more than 1,000 readers within six short months. Although his company would expand to embrace many other popular pastimes, Al Kalmbach was tireless in his efforts to grow Model Railroader and to popularize model railroading in general.

But the magazine remains the beating heart of the Model Railroader brand, even in an era where many print publishers are struggling. “Only a handful of print monthlies have ever proven successful enough to reach 1,000 issues,” notes Steve George, Kalmbach’s vice president of content and Model Railroader’s editorial director. “This is a testament to the enduring power of our print titles. Here’s to the next 1,000 issues!”

Model Railroader #1000 hits newsstands March 14 and will be available as a digital edition at ModelRailroader.com.