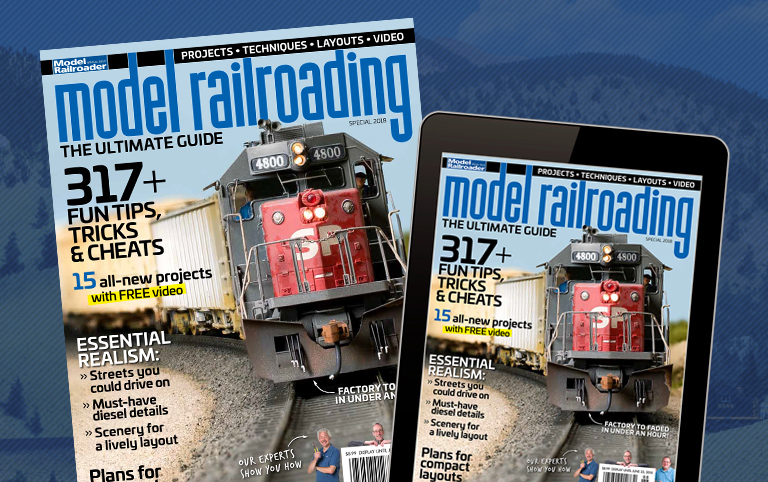 WAUKESHA, WI/NEW YORK, N.Y., (May 16, 2018) – Kalmbach (Kalmbach), the content creator of such well-known and respected media brands as Discover, Astronomy, and Model Railroader, among others, today announced that it is launching a special issue publication Model Railroading: The Ultimate Guide, featuring exclusive content previously only available on its digital video channel, MRVideoPlus.com.

Model Railroading: The Ultimate Guide, will be available on newsstands through June with a cover price of $8.99. The issue features 300+ tips and tricks for model railroad enthusiasts, on everything from designing the perfect track for your space to achieving ultimate realism on details like backdrops, landscaping, roads and more. The special issue will also be available as a digital edition on the Kalmbach Hobby Store (kalmbachhobbystore.com).

Model Railroader Video Plus, the first all-digital video subscription from Kalmbach Media, is launching the new SIP to celebrate its 5th anniversary with this print extension that leverages its vast video assets.

MRVideoPlus.com was launched in 2013 by staff members at Kalmbach’s flagship brand Model Railroader which was originally founded in 1934. The pioneering subscription site quickly found a devoted digital video audience among model railroad enthusiasts and currently has over 12,000 paid subscribers providing them with travel ideas and inspiration for new ways to experience their love of railroading.

MR Video Plus offers more than 1,200 videos and adds new ones every week. Its catalog boasts an amazing array of content, ranging from basic modeling techniques to detailed advanced instruction. It also includes a collection of inspirational visits to fantastic model railroads and exciting places to experience real railroading.

“We already have Model Railroader magazine, the biggest in the industry,” says MR Video Plus Producer David Popp. “But we felt there was room for a product that curates Video Plus content in an unconventional way—adapting it for print in a dynamic and fun way that engages all generations of modelers.”

A big part of MR Video Plus’s success comes from its ability to resonate with its hyper enthusiast audience. Popp explained that the underlying theme for the site from day one has been “keeping it real.” He said, “That includes the mistakes. We know that some of our viewers will do the same things, so we show the mistakes and how to fix them.”

According to Popp, the MR Video Plus theme is that every customer matters – whether they subscribe or not. This philosophy has produced a vibrant core community and gives its members a sense of ownership of the brand. “We don’t hide here,” said Popp. “The entire team talks and engages with viewers regularly sharing our advice and expertise.”

MR Video Plus continues to move forward both in and out of its digital-subscription space with plans for new programming, subscriber features, as well as other products viewers have requested. “We know our core community better than anyone,” says Popp. “And we can provide a fun, highly personalized experience across multiple platforms.”