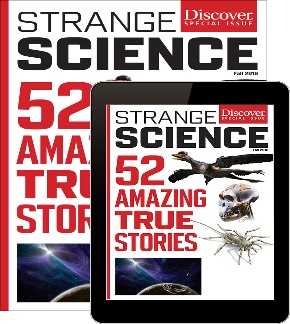 Find out how a summer thunderstorm generates antimatter. Meet the real wonder women from humanity’s past. See the reptile whose bones glow in the dark. Join the hunt for gold in our galaxy (there’s a lot of it). Strange Science shares these and dozens of other fascinating articles, chosen from among some of the most popular digital stories published by Discover.

What would happen if you stuck your head in a particle accelerator? How can wood be stronger than steel? Could suppressing a sneeze kill you? Is there really a scientific formula for happiness? Discover’s editors and writers share the answer to these and many more intriguing questions — all based on genuine scientific research — in the 100-page Strange Science digest.

“This is some of the weirdest true science you’re going to read about,” says Becky Lang, Executive Editor of Kalmbach Media’s Science Group. “And insatiable curiosity is king. We deliver on that in this new publication.”

“Everyone loves reading and sharing odd and unusual stories,” Lang adds. “But there’s a lot of content out there that’s based on pretty questionable sourcing and reporting.”  She notes that “Instead of giving our readers tall tales and urban legends, we packed this issue with factual, documented stories that are truly strange, yet true. The digest-sized format makes it easy to throw in a bag, briefcase or backpack and take with you wherever you’re going.”

Discover’s Strange Science will be available on newsstands through November with a cover price of $7.99, or through Kalmbach’s My Science Shop.

Kalmbach is also a leading producer of conferences and experiential events for the hobbyist and enthusiast marketplace including the recently held International Train Expo; the Bead & Button Show, which draws over 11,000 participants from across the country; and, the Craft Beer Festival among others