WAUKESHA, WI/NEW YORK, N.Y. — Kalmbach Media, the content creator of such well-known and respected media brands as Trains and Classic Trains, announced its initial plans today commemorating one of the greatest anniversaries in the history of American engineering and ingenuity: the completion of the first Transcontinental Railroad 150 years ago on May 10, 1869. 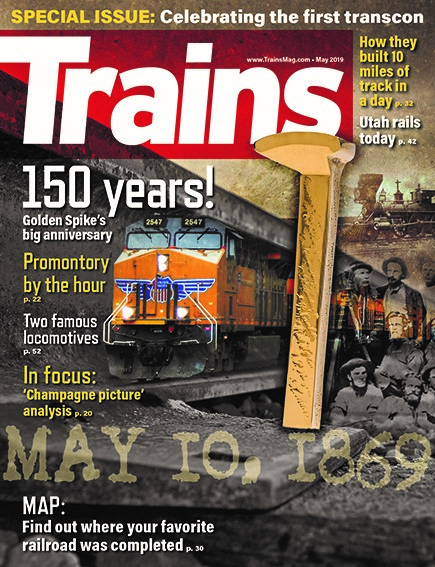 In the weeks leading up to this anniversary, Kalmbach Media’s railroad editors have prepared a special May 2019 edition of Trains, and developed a range of special content, features, and products for customers both at Trains’ and Classic Trains’ web sites, and on Kalmbach’s e-commerce portal KalmbachHobbyStore.com.

In addition to these special offerings, Kalmbach has gathered together a team of top railroad and railroad history experts.

Among these experts are:

Jim Wrinn, editor, Trains, the world’s best-selling railroad publication. Wrinn is a leading voice in steam locomotive preservation and historic operations in the U.S. He has been editor of Trains since 2004 and has reported on railroad topics from throughout the U.S. and other countries with significant railroad cultures, including the United Kingdom, Germany, Switzerland, and most recently, Peru.

Before Trains, Wrinn was a journalist at a series of newspapers in North Carolina, including the Charlotte Observer. He has written or co-authored four railroad books including, “Pictorial History of North American Railroading,” (1996); and “Steam’s Camelot,” (2001), about the Southern Railway and later Norfolk Southern Railway’s steam locomotive heritage program.

“The Transcontinental Railroad anniversary is cause to celebrate the magnificent genius — and just plain hard work — of humanity in uniting a nation,” Trains editor Wrinn says.

Wrinn states that during the next several months, Trains and Classic Trains editors will share one-of-a kind articles and insights into the building of the Transcontinental Railroad that will inspire and educate rail enthusiasts and history buffs of all ages.

“We hope to show just how ambitious and challenging the seven-year journey to laying the last rail and driving the last spike was in joining the Central Pacific and Union Pacific railroads at Promontory Summit,” says Wrinn. “We want to bring it to life for readers, so they become familiar with the key players and the thousands of nameless immigrants who made it possible — and give them a new appreciation for one of the major turning points in our nation’s history.”

Kalmbach’s digital media websites and extensions across the Kalmbach portfolio of brands reach more than 35 million consumers on 18 sites, including the e-commerce sites My Science Shop, Kalmbach Hobby Store and the Jewelry & Beading Store. Kalmbach is also a leading producer of conferences and experiential events for the hobbyist and enthusiast marketplace including the recently held International Train Expo; the Bead & Button Show, which draws over 11,000 participants from across the country; and, the Craft Beer Festival among others